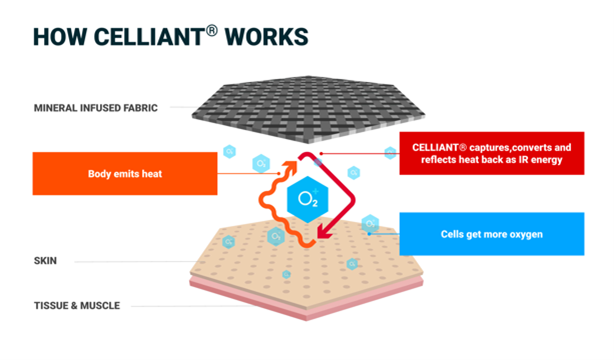 With over $1 billion in retail sales a Genuine Desire to Improve the Quality of Peoples’ Lives and Health Began It All.

LOS ANGELES, Nov. 1, 2022 – Now counting over $1 billion in retail sales, over 60 brand partnerships, over 30 different product categories and offices on four continents, Hologenix®, creators of CELLIANT®, began with an idea 20 years ago. Co-founder and CEO Seth Casden had a genuine desire to improve the quality of people’s lives and health with an emphasis on non-invasive, natural, holistic healing. An athlete and a world traveler, Casden became fascinated with the effect infrared has on the body and worked with a dedicated team to develop and market CELLIANT® infrared technology and thus materials science innovator Hologenix came to be.

CELLIANT, a proprietary blend of IR-generating bio-ceramics that are ethically sourced, is a unique combination of nature and performance. CELLIANT captures and converts body heat into infrared energy for increased local circulation and cellular oxygenation, resulting in stronger performance, faster recovery and better sleep. It is a key ingredient in textiles, spanning both performance and fashion apparel, sleep and lounge wear, bedding, upholstery, uniforms and medical supplies.

Partnerships for Innovation and Growth

The first partnership Hologenix secured was with the Ireland-based fibre company Wellman International Limited, a fully owned subsidiary of Indorama Ventures and a pioneer in recycling technologies.  Hologenix still works with them today, a tribute to the company’s ability to form long-term partnerships with like-minded organizations, and their joint project of pure white CELLIANT rPET fibre was shortlisted for a prestigious Drapers Sustainable Fashion Award earlier in the year.  This is one of ten awards Hologenix and/or CELLIANT have won.

On the brand side, many of the first brands to incorporate CELLIANT were in the sportwear industry, including Adidas, Reebok, Saucony, Eastern Mountain Sports, Sierra Designs sleeping bags and Superfeet insoles.  “These brand partnerships were key in bringing the technology to market, validating it and convincing consumers to try out CELLIANT-infused products and learn about the benefits,” advises Casden.  “The growth since the beginning has been exponential and in October of 2022 alone, we launched three new partnerships.”

“We are particularly excited about a new partnership with Medline, a leading medical product distributor and manufacturer, on a new line of CURAD® brand orthopaedic products powered by CELLIANT technology,” continued Casden.  “A partnership with a major sportswear retailer is just around the corner.”

Looking ahead, Hologenix is continuing to research applications for CELLIANT in the agriculture industry and wound healing and diabetes.  Expansion into the FemTech market with both product applications and scientific research about the benefits of infrared for women’s health issues is also on the horizon.

In 20 years, Hologenix has achieved many scientific milestones, and CELLIANT has been and continues to be rigorously tested by a Science Advisory Board composed of experts in photobiology, nanotechnology, sleep medicine, and diabetes and wound care. The Science Advisory Board has overseen nine peer-reviewed published studies that demonstrate CELLIANT’s effectiveness and the benefits of infrared energy.

Since its founding in 2002, Hologenix has conducted more than 1,000 tissue oxygen tests in its IRB-certified laboratory in Pacific Palisades, California, and the company currently holds patents filed in 16 countries.

In 2017, the FDA determined that CELLIANT products are medical devices as deﬁned in section 201(h) of the Federal Food, Drug and Cosmetic Act and are general wellness products.*

*For more information on the FDA classification of a medical device, visit U.S. FDA site.

A Company on the Move and A Global Leader

Hologenix has been making a name for itself since its inception and for three consecutive years was highly ranked in the Inc. 5000 list of the fastest-growing private companies in the U.S.  In addition to having offices on four continents, another sign of its global footprint, CELLIANT is registered as a medical device or cleared to market in more than 50 countries.  What’s more, there are 50,000 kilograms (or more than 55 tons) of CELLIANT infrared minerals in circulation around the world.

Whether you know it or not, CELLIANT and Hologenix may be in your future.