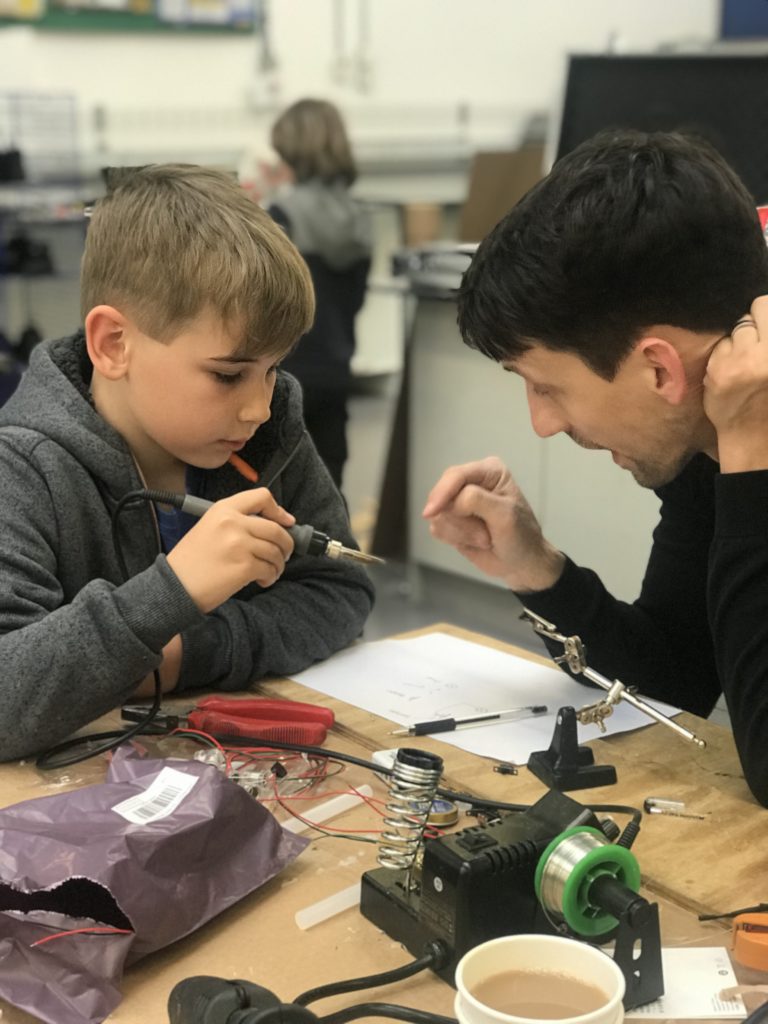 A Dyson inventor who turned his living room into a PPE factory is putting years at the incredible company to great use to inspire the next generation of problem solvers.

Ben Edmonds has worked with the world-famous company for 10 years and has taken part in some major projects, including helping come up with the world’s smallest vacuum cleaner.

Now, he is passing those skills back to children in Reading, helping an old friend out at the same time.

Away from work, Ben was able to use his skills to turn his living room into a PPE factory during the early stages of the coronavirus pandemic and was able to create protective equipment for staff at his local hospital.

He said: “Dyson is an incredible place to work, where you have access to these world-class facilities.

“I work with some of the most creative and forward thinking people around.”

He said he felt he needed to help once the pandemic hit and put his skills to good use.

He said: “I turned my living room into a rudimentary factory.

“There was kit all over the place but we were able to help produce 200,000 items of equipment.”

He is now running an “Inventor Club” at UTC in Reading.

The club came about around four years ago in the same living room, when he realised how under-resourced primary schools were for Design and Technology.

He decided to do something for his three daughters.

He said: “I put a Facebook post up about what sort of design and engineering content I would be teaching them and within three weeks I had 300 families show an interest in also doing that with me.

“So I started Inventor Club in my living room, and we grew so big I reached out to UTC Swindon (through my friendship with Jon), and we set up an after-school club.

“Inventor Club is all about problem solving.

“More often than not it’s not really about the challenge, it’s about the thought process behind it.

“We do anything from imagining we are elderly people needing to pick up objects off the floor to how we might remove broken fuel cells from a fusion reactor to making hydraulically operated diggers.

“All of that is applicable for whether they go into design and engineering or whatever they do in their later life.”

He added he was concerned modern teaching methods focused too much on providing the information needed to answer exam questions rather than teaching thinking skills and problem solving.”

He said the future leaders of this country need more of this way of thinking.

He added: “I’ve found a happy home teaching after school at the UTCs, they’ve welcomed me with open arms.

The kids get a flavour of what a UTC education could be like, and through me a flavour of what design and engineering looks like. And I’m getting them early enough that they could start to think ‘actually I could see a career here’.”

He explained: “I’ll be teaching entrepreneurial skills – how to turn ideas into small businesses and how to work through the process that we use at Dyson – going from a blank sheet of paper to working with prototypes and concepts, to the product in people’s hands, setting up the business and all the social media that goes with it.”

The project came about as a result of his long friendship with UTC principal Jon Nicholls.

He said: “I’ve known Jon forever; we’ve been best friends our entire lives. Jon actually set out to be a mechanic in a Formula 1 team, and as he got closer to that he found he had a huge aptitude for the education side of it, and ironically, I’ve done a similar thing – I always wanted to be an inventor and a product designer for Dyson and the closer I got to that, I then discovered I also had an aptitude for passing on my knowledge to kids.

“So we’ve kind of both done these two different paths where they’ve gone full circle and now we’re both educating children and we’re getting to do stuff together.”