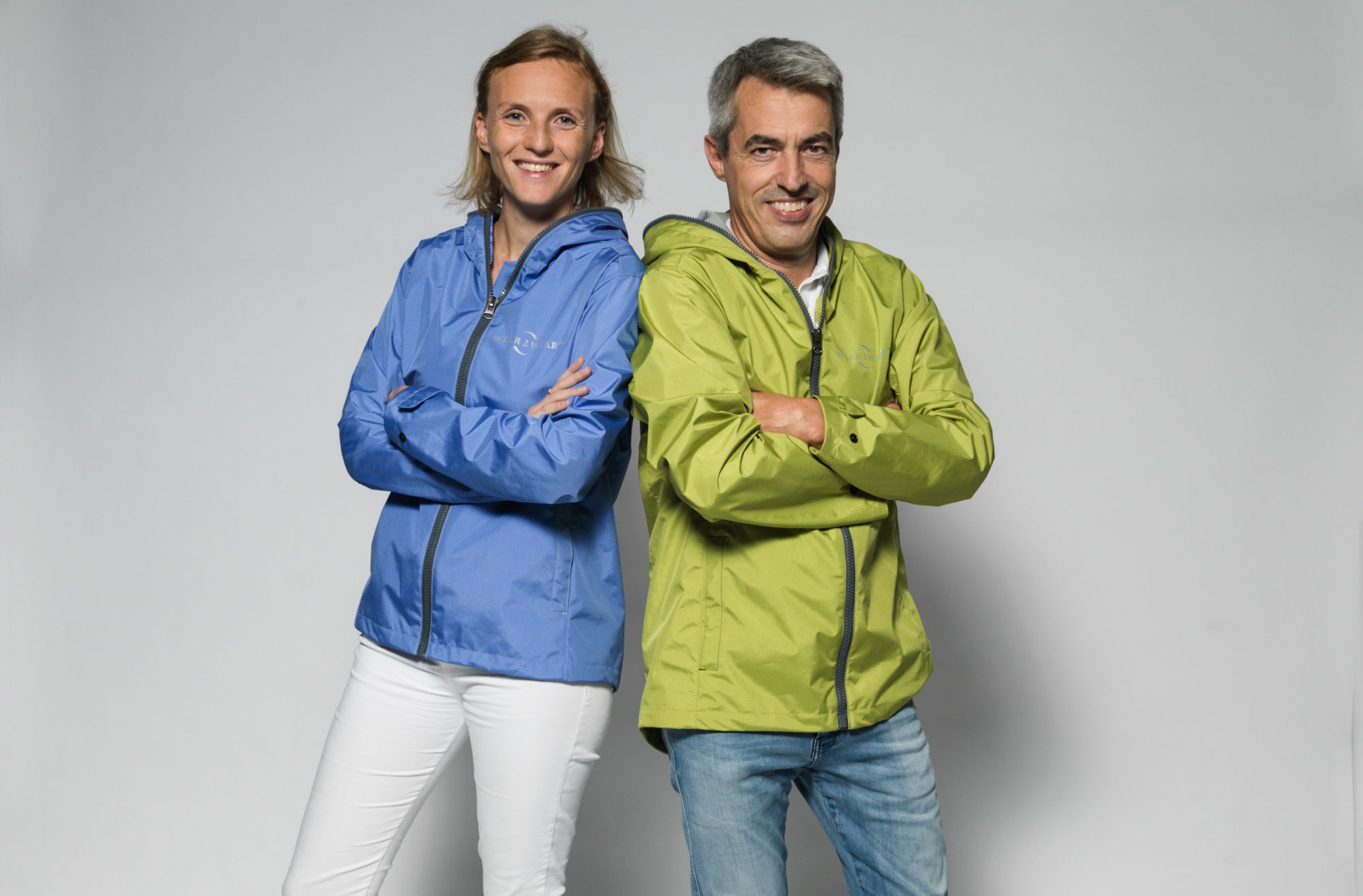 At first glance, it’s a normal rain jacket: three layers of polyester, a lining on the inside, a water vapour-permeable membrane on top and water-repellent fabric on the outside, with a hood. But the zipper makes you wonder. Instead of ending at collar height, it pulls up over the forehead … Who would pull it that far?

The explanation is given by Annette Mark from textile manufacturer BTK Europe, a proud Trusted Member of PCIAW®.

The zipper is intended to be an eye-catcher – and is primarily for recycling: Sewn tight with a thread that dissolves in boiling water, it is easier to remove than two fasteners. “Pull once and you’re done,” says the expert on textiles and recycling.

The light green colour is also due to recycling: The raw material, a granule made from a mixture of different but single-variety textiles, is dark green – and melting and spinning out the material for new yarns lightens it.

The circular economy in the textile industry

Magnetic buttons, seams, hems: Every detail of the jacket follows the Design2Recycle approach, as it says on the Wear2wear website. Six companies from Europe’s textile industry have joined forces in this consortium to promote a circular economy. After all, more than 70 per cent of all textiles produced worldwide end up in landfills or incinerators without being recycled.

How can circular economy be achieved in this industry? A team from Empa’s Technology and Society lab took a closer look at the jacket and its environmental impact using life cycle analyses over a four-year period of use; including washing it three times. The candidates: a jacket produced without circular economy methods, the “starter version” of the jacket available since 2019 in blue – with an outer layer made of polyester derived from used PET bottles – and the green version from the subsequent recycling process, in which unavoidable material losses are replaced by new polyester.

The researchers’ analyses show that the recycled products perform better – in eleven environmental risk categories, including global warming, toxicity to ecosystems and water scarcity. There are strikingly large advantages in air pollution, for example, because fewer pollutants are released without incineration, as well as in water scarcity, especially for the green jacket after the first recycling “loop,” for which PET bottles are no longer used.

Other insights from the analyses: In terms of the greenhouse effect, the maximum benefit is a solid 30 percent. And the use of PET bottles does not bring any major ecological benefits. What is decisive, on the other hand, is the number of recycling cycles to produce new jackets: The balance improves from jacket to jacket – provided the quality of the polyester remains high enough.

In practice, this is challenging, as Mark explains: “Depending on the origin, the raw material sometimes differs significantly.” If the fibres have been coated with certain additives, the nozzles of the spinning machines can become clogged. And in general, the quality decreases with the number of recycling cycles: more irregular structures of the yarn and lower strength.

Annette Mark’s conclusion on the Empa analyses: “very realistic” and useful for improvements. “The cooperation was very good,” she says, “full transparency and no compromises.” The researchers also found the collaboration fruitful. “Open collaboration between science and industry is enormously important,” says former team member Gregor Braun, who has since left Empa and now works as a consultant for sustainability. “Sustainability and circular economy can work well together.”

Will the jacket become a market success? “The textile industry is in a state of upheaval. A rethinking is taking place right now that we shouldn’t miss,” says Annette Mark. But large corporations that are already developing similar products “have completely different options.” After all, talks are underway with a sportswear manufacturer – for a fleece jacket, for which the Empa findings could also be useful.